The time of year when we venture into apple orchards and make ourselves sticky (and a little ill) from all the apples we sample. Because we went a little later than usual this year, Mama and Papa indulged me in my choice of attire that day:

After trying both kinds of apples, this monkey is sticking with the red.

Ordinarily, we make applesauce, but as we still have a fairly full stash from last year’s harvest, Mama thought we’d try our hands at apple butter. I’ll write about that a little later because for now, I want to tell you about something that can only be called a revelation (if only I knew what that word meant):

It’s a tad sweet and totally snackable. We made one loaf of bread, and from here on out, we’re making apple muffins.

We used the yummy recipe found here. Mama substituted one cup of the flour with whole-wheat and all the sugar with brown, just because that’s how Mama does things.

First, I mixed the brown sugar together with the cinnamon. Here I am breaking up the little lumps of brown sugar. (Mama just reached in and pinched whatever was left with her fingers.) 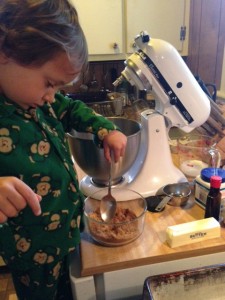 Then we put different sugar and butter in the mixing bowl and creamed them with the paddle. Mama told me to start slow, and I said “otherwise the dough will get angry.” What I meant was that it will fly all over the place. You’re not just combining the sugar and butter. What you’re doing is smashing the sugar into all that butter, coating all the little sugar granules with fat. This results in a lighter finished product with better lift. 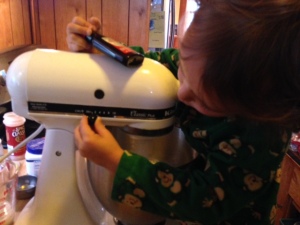 I’m holding the vanilla because I can’t wait to add it. I love it so much!

Once the batter was made, we practiced a new word: half. Mama spread half the batter into the bread pan, then I sprinkled half the chopped apple over the batter, then topped that with half the cinnamon-brown sugar mixture. (I might have eaten a little along the way.)

Then we repeated the whole operation with a second layer. Mama advised me to spread out my additions as evenly as possible so there were no overly sweet or apply spots.

I was eating batter with one hand and sprinkling cinnamon-sugar with the other. Talk about multitasking.

Our bread took a bit more than an hour to bake until our tester came out clean. (When we made muffins a week later, the same amount of batter and fillings made 12 and baked for 20 minutes.) I declared this bread delicious. Good thing we picked lots of apples. We’re going to need them.