We’ve been fortunate to have a really long blueberry season this summer… then again, they started pretty late. And our two bushes never produced, so there’s that. Still, we went picking a bunch of times.

After Mama did all her sorting and freezing (and I did all my snacking), she made jam. Now, I like to say “jams and jellies” because that’s what Mr. Gru and Dr. Nefario say, but Mama tells me that they’re very different. Jam is the cooked down, sugared, soft, and jelled version of fruits, whereas jelly is the jelled version of a fruit’s sweetened juices—that’s why it’s clear.

And if you know one thing about us, it’s that we don’t have time to make jelly.

The first thing to do is mash the berries. I would like to say that Mama let me do this, but the whole jam-making experience was more of an observation. Blueberry mess + boiling sugar syrup = imminent danger in this household. 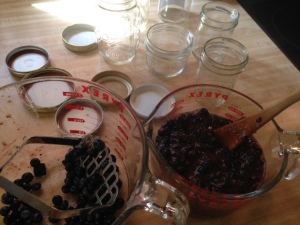 Once the berries were mashed, they were cooked with some water, local honey (Mama thought she’d change it up a bit), lemon juice, spices—cinnamon and cardamom, to be exact—and a dash of good ol’ pectin, to help it set up. When we’re making a quick on-the-spot jam, Mama skips the pectin, but as blueberries don’t have a lot of it on their own, she opted for the help. Pectin also needs a bit of acid to do its magic, hence the lemon juice (that, and blueberries and lemons are just plain yummy together).

Either way, the simple test to see whether the jam is sufficiently jelled is by putting a dab of it on a plate that’s been in the freezer. Return it to the freezer, and if, when you take it out and run your finger through it, it seems jammy, you’re done! If not, return the jam to a boil and cook it down a little more.

Mama decided to store this jam in the freezer (mainly so she didn’t have to haul out her canning equipment), so she put it in a bunch of pretty little jars instead and called it a day.

Once cooled, she carted the jars to the freezer and found a cozy place for them. And the very next day, I made myself a yummy blueberry jam and peanut butter sandwich.

Mama says I look like the Joker, whoever that is. I say this face looks like summer.