When Mama was growing up, she told me she had an Italian plum tree and a sour cherry tree in her yard; later, there were apple trees. One by one, though, they began to die, but the plums and “sours” (as she calls them) continue to be among her favorite fruits. It’s probably how she came to pinch the cherries from the tree down the street from her, in the yard of an old woman whose tiny house was all that stood guard over the coveted summer crop.

It’s a wonder, then, that it took three summers before Mama noticed the wild raspberry bush in our neighbor’s yard…especially since the house has been vacant since before I was born. When she noticed the red gems glowing in the sunlight, she darted across our semi-private mountain road with me (after looking both ways, of course) and pointed out the very reddest ones, showing me how to pick them and either pop them right into my mouth or put them in a dish. (Sometimes I pick the orange ones and throw them because that’s fun too.) She only let me get the berries closest to the edge of the bush because, as she soon discovered, the vines and leaves were positively covered in thorns of all sizes that made her skin itch.

Mama explained I can only ever pick berries when I’m with her or Papa, and only then, just the berries they say are okay to eat. (Papa later pointed out that she failed to explain that we shouldn’t be picking someone else’s berries without their permission. Mama replied, “Who’s there to ask?”) Luckily, there’s a small vine of berries on our side of the road, in front of the whistlepig’s hole, so maybe next year it will have enough fruit for us. 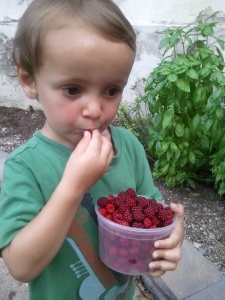 This is photo was taken a year after the original post. We get about this many berries every other day.

Until then, Mama goes on a raspberry raid almost every day, though she sadly reports that they’re coming to an end. I get to eat them with my yogurt in the morning or as a snack throughout the day. They’re yummy and very sweet. I like that they’re so tiny, and Mama likes that they keep in the fridge for a couple days without spoiling. When she started picking more than we could eat, though, she decided to make a small batch of freezer jam. Because it gets very hot and can splatter, she didn’t let me near the stove when she made it. But I did get to taste the result when she spread it on a homemade flatbread that Papa grilled, then topped with arugula and dollops of ricotta. Wherever the fruit comes from, I could get used to this kind of eating.

2 cups wild raspberries (or any other berry, or a mixture)
2 cups sugar
Juice of half a lemon (or to taste, but you need some acid to make this all work)

Wash and prep your berries (hull and halve strawberries, destem blueberries, etc.). Add them to a small saucepan with the sugar and lemon juice. 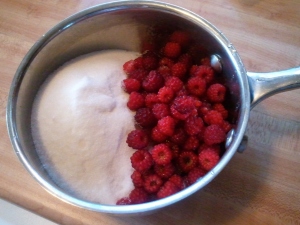 Equal parts fruit and sugar… I like this already.

Bring it all to a gentle boil, and lightly smash your fruit. You can leave a few whole chunks, but you need to smoosh the fruit to release its pectin. Boil, stirring frequently, until the jam begins to thicken. This could take about 10 minutes—the riper and sweeter your fruit, the longer it will take. 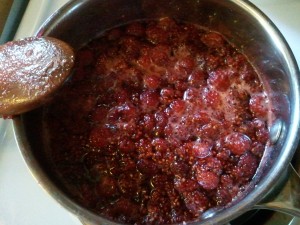 See how it’s getting all gooey and jammy?

If you think it’s jammy enough, you can test it by spooning a bit onto a plate and sticking it in the freezer. Once it’s cool, you can tell whether it’s ready by tilting the plate—if the jam runs right off, it’s not done; if it sort of goozes the way jam should, then you’ve got yourself jam. Carefully pour the hot jam into very clean jars—this recipe makes less than 1 pint. Mama uses a Ball jar and waits to see if the seal pops shut (a time-honored tradition in my grandma’s kitchen, she tells me). Regardless of whether they seal, Mama waits until the jars are cool to the touch then puts them in the freezer. No special canning equipment or know-how required. Unfrozen, the jam will last in the fridge at least a month, but really, could you wait that long?

Note: Some people use pectin when they make jam. Mama says it’s a natural ingredient in fruit anyway, so she doesn’t add it to hers. Even though it ensures your jam will “gel” every time, she likes the simplicity of measuring sugar and fruit in equal proportions. And her jam is usually thick enough to spread between cake layers. Usually. If you decide to use pectin, she suggests buying the no-sugar-added kind, following the package directions for the amount to use, and decreasing the amount of sugar you use in this recipe. (You’ll still want to add sugar, even with this kind of pectin.) Be sure to boil your jam to activate the pectin—but not too long, or the pectin will start to break down!