Mama read a book on how French kids sit still at mealtimes and eat whatever’s on their plates. She thought she could implement the same system with me. (What she doesn’t know is that she almost succeeded, but then she started working, and now I eat at a very American daycare with very American kids.) But the point of this blog post isn’t to document Mama’s frustrations with me as I continue to throw food (though I do think she’s pretty funny when she’s annoyed); it’s to tell you about the lovely cake we made! The book talks about children helping out in the kitchen, something I’ve been doing for a long time now. It goes further to share a recipe for yogurt cake, or gâteau au yaourt, which is the first thing many French kids learn to bake.

I can see why. It’s so simple! Of course, there’s yogurt in it, and then almost all the other ingredients are measured with the empty yogurt containers. Mama bought lemon yogurt, which she poured into a large bowl. She spooned sugar into one container, which I dutifully dumped in. I then stirred the sugar and yogurt together, testing as I went along to make sure everything tasted right. Then Mama added a teaspoon of vanilla, a little less than a container of canola oil, and 2 eggs. She let me continue to stir but said I couldn’t taste anymore because of the eggs. 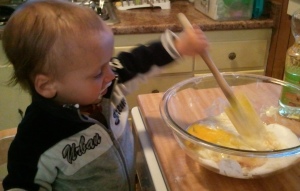 Now that the eggs are in, I had to stop sampling. (Note my yogurt mustache.)

Then she spooned flour into the containers (4 of them, in total) and let me dump them into another bowl. She had to show me how to do it because I started to pour the flour towards me, instead of away from me and into the big bowl! (How was I supposed to know?) Mama added half a tablespoon baking powder and let me stir it all together. I liked using my hands to mix it, and it looked so nice on the countertop… and the chair and the floor and my clothes. After that, she added the flour to the egg bowl and stirred it really well. (She thought this might be a better job for her.)

I don’t know why anyone would bother with a spatula to stir a cake when a hand works so much better.

Mama showed me how to grease the cake pan with the canola oil, then she poured the cake batter into it. I smoothed out the cake, and into a 375° oven it went.

I’ve heard cake batter is pretty good, but Mama stopped me before I could taste any.

I nearly forgot about it, but I suppose it took 30–40 minutes to bake, and before I knew it, there was a cake! Mama cut a slice to share with me. She said it’s not the prettiest cake she’s ever made, but it sure tasted the best since we made it together. (To be honest, it seemed like I did most of the work.)

It looks like I made this cake in my play kitchen, but I didn’t.

I liked the lemony taste to the cake, and it wasn’t too sweet. (It would be delicious with blueberries or raspberries!) It was heavy, though, so I didn’t feel like I needed a whole piece to myself. (Mama, however, had other designs in mind.) I like helping Mama in the kitchen, and Papa was very pleased to see we baked a cake. If this is what being a French kid is all about, then sign me up. In fact, my passport arrived last week.

5 thoughts on “But we’re not French”