Now that I’ve completely forgotten what it’s like to ever be warm while outdoors, Mama decided to bring back a little bit of summer in the form of marshmallows. She’s made these many times before, but not with me. And because it’s so cold outside, they make the perfect accompaniment to hot chocolate or hot cocoa.

And what’s the difference between these two chocolaty libations?

Hot cocoa is made with unsweetened cocoa powder mixed with milk and some sort of sweetener. The beauty of it—and why Mama tends to make it for me—is that you can control the amount of sugar. She brings the milk to a simmer, then whisks in the cocoa powder, brown sugar, and a splash of vanilla. She tastes it and adjusts the flavor to her liking. If you need a formula, however, The Joy of Cooking pairs 1 Tbsp cocoa with 1 tsp sugar and ¾ cup milk.

Hot chocolate, as its name implies, is melted chocolate, mixed with a bit of hot milk. It’s much richer and silkier than hot cocoa. You can add more sugar or other flavorings to it, but that’s basically all there is to it. When Mama makes it, she brings milk to a simmer and tosses in a combination of finely chopped dark and milk chocolates and whisks it until the chocolate melts. Then she adds a splash of vanilla, and she’s done. This is another one of those recipes that you throw together by taste, and if all you have on hand is chocolate chips, by all means, they’ll work, too. 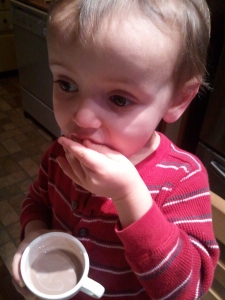 I’m snacking on marshmallows while sipping my “warm cocoa.”

As for the marshmallows, they take a little longer than either hot chocolate or hot cocoa to make. There are many recipes for marshmallows, and the one Mama uses starts with gelatin. We’ve used this before in our panna cottas. 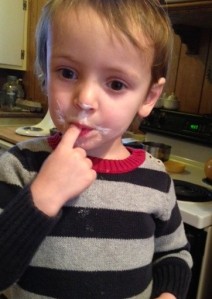 While the gelatin is blooming in the bowl of the stand mixer, Mama heats up a mixture of water, sugar, and something called invert sugar, which she says is similar to light corn syrup. It takes a long time for that mixture to get to 240°F, or “soft ball” stage, which Mama says is a candy-making term for when a bit of melted sugar turns into a soft gel-like ball when dropped into water. 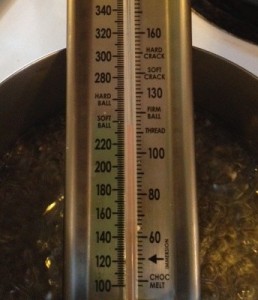 The red line of the thermometer is really close to “soft ball.” It takes a while to get there, but once it’s close, you have to be ready for it!

What’s left is mixing the hot syrup into the gelatin. It takes about 15 minutes, which is 15 minutes too many!

The gelatin mixture soon after the sugar syrup is added.

Here it is just a few minutes into mixing.

Once the mallow is properly whipped, all that’s left to do is spread it in a pan to set. 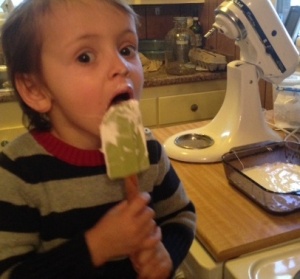 Marshmallow is really sticky. I had to work hard to get it off this spatula.

We of course had marshmallows in our hot cocoa, but even better: Mama made graham crackers over the weekend, so we had s’mores after all. Toasted marshmallows are the best! 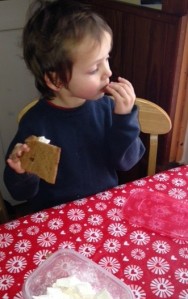 You can’t see it, but there’s melted chocolate on that graham cracker.