Well, the heat wave finally broke, but it’s still awfully hot. Mama decided it was time for some lemonade. You won’t believe how easy it is to make. 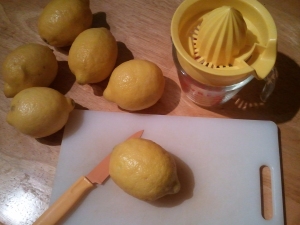 Get together your lemons, juicer or reamer, knife, and cutting board.

Since these were large lemons, Mama used a regular hand juicer rather than her electric one. She took out 6 lemons, as that’s about what it takes to get 1 cup of lemon juice. She ended up needing only 4 of them, though. 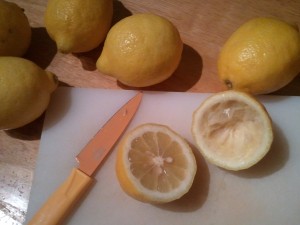 I tried juicing a lemon, but I could either press or twist, not both at the same time.

Juicing the lemons is probably the toughest part. After that, it’s a matter of combining everything, and choosing how you want to serve it. I like lemonade very much, especially the way it makes my face pucker. Mama likes making it herself because she can control the sweetness. And really, it’s not an expensive drink to make, even if you get a hankering for the stuff once the heat wave passes.

In a pitcher, combine the lemon juice and sugar. Stir to start dissolving the sugar. Add the water, then stir until the sugar dissolves. Serve straight, over ice, or with a pick of frozen fruit for garnish. 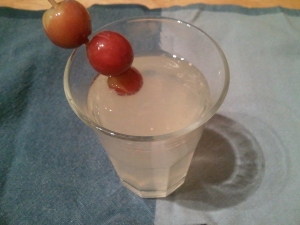 These frozen grapes make a terrific and refreshing complement to the lemonade.

Variations: Instead of a pick of frozen fruit, toss a handful of strawberries, raspberries, or blueberries into the lemonade as it sits in the fridge. Or add a few sprigs of mint, thyme, basil, or lemon verbena. Instead of mixing the sugar with the lemon juice, pulse it in a food processor or coffee grinder with 2 Tbsp lavender flowers until powdery, then add that to the lemon juice and water. (Alternatively, make a simple syrup by combining the sugar and 1 cup of the water in a saucepan over medium heat, until the sugar is melted. Add the lavender flowers and steep until the mixture cools. Discard the flowers, chill the syrup, then proceed with the rest of the recipe.) Or try two of Mama’s favorite ways to have this lemonade: as an Arnold Palmer (50/50 with unsweetened iced tea) or mixed with limoncello (she says it’s lemonade for adults).