Ina Garten, “the Barefoot Contessa,” has said she makes a roast chicken for her husband every Friday. Mama doesn’t cook one chicken a month, let alone every week, but she should. She says they’re supereasy to prepare and can be made very flavorful very simply. We got a 3-pound chicken from my friend Walter’s mama. It was so fresh, it was barely cold from their refrigerator!

First, Mama rinsed the chicken, inside and out, then patted it dry. Just because. Then, the easiest way to add flavor to your bird, according to Mama, is to let it cook in fat. This means you should keep the skin on it while it bakes (remove the skin before you eat the chicken, and you take all that fat with it, believe it or not). But Mama adds more flavor by rubbing olive oil all over the skin and sprinkling it with a lot of kosher salt and pepper. Sometimes she puts a few pats of butter under the skin, massaging it into the breast meat. And that’s all you have to do! Mama always puts aromatics inside the chicken, too, such as a halved head of garlic, a quartered onion, a halved lemon, and whatever whole herbs she has on hand. You won’t eat these, so you don’t even have to peel them.

Mama tied the chicken’s legs together with kitchen string and tucked the wings under where its neck would be. Doing this keeps these extremities close so they don’t burn (or worse, dry out), but you certainly don’t have to do it. Mama says to bake your chicken on a rack set in a roasting pan (or on a bed of preferred veggies) at 425°F for 15–20 minutes per pound. To test if it’s done, you can temp it in the thigh (careful not to touch the bone) to 165°F, or you can wriggle the leg. If it seems like it might come out of the socket easily, and the juices from it run clear (not pink), then it’s done. If you think it’s not quite done, but the skin is getting very crispy and dark, tent some foil over it. 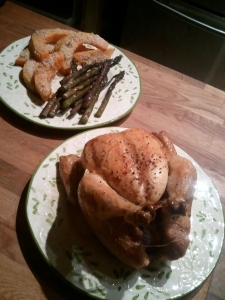 This little guy took about an hour to cook. You can see that Mama took advantage of that time by roasting some asparagus and pumpkin. Not really a seasonal match, but my folks like asparagus, and I can’t say no to orange food, especially one roasted with rosemary and Parmesan. The Cinderella pumpkin, as Mama called it, roasted with the chicken, and the asparagus cooked while the chicken rested. (Don’t forget to let your bird rest before you slice into it, Mama says, or your bird will lose its juiciness.)

I skipped the asparagus, and even after all that roasting and resting, the chicken didn’t really appeal to me. Papa ate a pretty good dinner, though, and he said the chicken was very juicy. But what to do with all the chicken leftovers? Mama has chicken salad and quesadillas in mind. I don’t know what a chicken “salad” is, but I sure do love quesadillas. And before the carcass was even cold, Mama had it in a pot on the stove for stock. (I’ll tell you about that another time.)

So the moral of the story is don’t be a chicken about a little…er…pullet. If Mama, a vegetarian, can do it, so can you!