Uncle Norman sent Mama a link for his favorite winter dish, which happened to be called “Dad’s Ratatouille.” Mama thought it sounded good and that I might like it too.

Each version of ratatouille Mama’s ever made is time consuming. Her first attempt, back in the ’90s, has a notation in the margin of her cookbook: “Takes more than an hour to chop everything.” While you don’t have to cook each vegetable separately, as in this recipe, it does help to ensure each one is thoroughly cooked. This version had Mama sautéing each vegetable in olive oil over medium-high heat, creating a nice char, before adding it to the Dutch oven lined with sweating onions and garlic. After filling the house with varying amounts of smoke, and putting the whole thing in the oven, she asked Uncle Norman, “Can you explain to me why it is I’m making ratatouille in the middle of winter?” His response: “You’ll know when you taste it.”

You might be wondering, as I was, what ratatouille is. Mama calls it is “a celebration of summer vegetables.” It’s often considered a peasant dish, and in southern France is most certainly eaten as an appetizer or side dish, warm or cold. (Mama, however, always eats it as a main dish, serving it over brown rice or quinoa.) A hunk of crusty bread goes a long way, too. What makes it so succulent and stewy is the addition of slow-cooked eggplant (which we like to call aubergine) and tomatoes, but other key ingredients include summer squash, peppers, and fresh herbs. Hence, Mama’s question to Uncle Norman.

Did I mention I don’t like tomatoes, not even spaghetti sauce?

But this conversation got Mama thinking…about ways to make an equally good winter version of ratatouille. Why not roast butternut and acorn squash to take the place of the summer varieties… maybe add some cremini and shiitake mushrooms to take the place of the eggplant (although it wouldn’t be so terrible to keep the eggplant—it’s ubiquitous year-round). And instead of fresh tomatoes (or regular ol’ canned tomatoes, as she used here), maybe a can of fire-roasted tomatoes. Or forget the tomatoes and use V-8 instead of stock, as she did here, or maybe an oaky red wine (not that I would know). Peppers—that other most ubiquitous of veggies—should most certainly be organic (always), and roasted, too. But why use peppers at all? Peppers add a sweetness, so why not substitute beets, especially golden ones in addition to red? I love beets! And while we’re at it, throw in some turnips, carrots, and sweet potatoes! Leeks! Brussels sprouts! Cabbage! All roasted with savory and sage! Mama also mused that instead of frying the veggies, she could make it easy on herself and roast them at a high heat, say 450°. If you’re a fan of grilling, as Mama is, try that (yes, even in the winter, as my GeeGee does, Carharts and all).

And the verdict? It was delicious. The vegetables were soft, and the flavors melded so I didn’t even taste the tomatoes or the peppers. It was creamy and practically spreadable, and I loved it with the brown rice. I didn’t really care for the skin of the eggplant, though, and neither did Mama, so she would definitely peel it off the next time (or get a better char on it). I surprised myself by having 3 helpings, it was that good. I had to fight off Papa for the leftovers. (Luckily, I always win such a showdown.) Mama declared it one of the better incarnations she’s made; she attributed it to the rosemary. And though she didn’t mind reducing the liquid after baking the ratatouille, she wasn’t sure it was really necessary. She’s keen to try her winter version, though, so stay tuned.

I can hardly wait…unless I decide I no longer like vegetables. 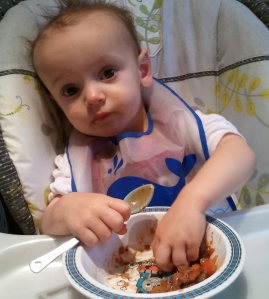 Ratatouille so good, I had to ditch the spoon and just dig in.

2 thoughts on “A ratatouille by any other name…”