Papa announced that he had a hankering for pad thai. Now, normally he and Mama would just order in Chinese, but for some reason, they decided to make it themselves.

If there were a signature dish to Thailand, this would be it. There are oodles of variations on it, but your basic components include rice noodles, tofu and/or shrimp, cooked egg, fish sauce, chilies, garlic, bean sprouts, cilantro, lime, and crushed peanuts—all done in the same wok. Often there’s carrot, scallion, basil, and tamarind in some form, as well.

Mama said I could be in charge of the noodles, but as they required being steeped in boiling water, she thought better of it, so off I went to play with my trains. Papa was in charge of chopping, while Mama made the sauce and got everything ready to go. When you stir-fry, you’re cooking over very high heat, so it goes quickly. If you start cooking, then stop to chop your garlic or mince your chilies, what’s in the wok will probably already be burned before you’re done. So get your mise en place together.

The first step is to cook your egg, as a kind of tiny, very flat omelet. First you lightly beat your egg, then when it hits the hot oil in the pan, you continue to beat it for about a minute before it starts to set. Once it’s cooked, remove it from the pan, slice it into thin strips, then add more oil to the wok. From there, you start to quickly cook your protein (cut into small pieces if it’s not tofu or shrimp); then remove it from the pan and then add your veggies. Follow with your sauce and your noodles, mixing it all up. Add back the egg and protein, and keep mixing everything. You want your noodles to absorb the yummy sauce and begin to fry a little bit. Then top with crushed peanuts and raw sprouts. Serve with wedges of lime. 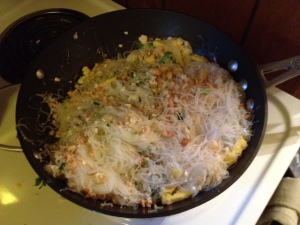 You don’t have to use a wok, but the deep sides of the pan sure help to keep all the noodly goodness in one place.

Mama had the back of her mind on alternate dinners for me, so sure she was that I wouldn’t eat the pad thai. But since she opted to go without the chilies, there was nothing about this I didn’t like. Those springy noodles were great, and I really liked the egg! The crunch of peanut was nice, too. But you know… I felt it needed more lime. So I said so. “I need lime.” And the reward for my fledgling sentence was more lime. Mama also served a cucumber-soy-ginger salad on the side. I had one salty bite, but I preferred the pad thai. What can I say? I’m a simple guy.

Next to tastiness, these noodles were just plain fun to eat.