In an effort to fill a Sunday, Mama and I traipsed around to different farm stands (with a stop at the zoo somewhere in between). Next to the zucchini that was almost as big as me, she spied some gorgeous giant yellow peppers and thought they would make good stuffers. At a later stand, she bought a couple ears of sweet corn (this is important, so pay attention).

Much like our ham-and-pea roll-ups, these peppers were stuffed with things we already had in the house. Mama says you can cram practically anything into them. She cut around the top of the pepper and pulled out the seedy core. Then she broke off the pieces of the pepper top and chopped it so she could add it to the pepper stuffing mix. We still had some tiny heirloom tomatoes from my friend Walter, and we had an already-cut onion in the fridge. She put these veggies into a small frying pan with olive oil, cumin, coriander, and salt & pepper and sautéed them until the pepper and onion were soft and the tomatoes were cooked down. She added the kernels from an ear of corn and some crumbled veggie meatballs she had made a few weeks ago and had in the freezer.

How can these not be good?

She stuffed a pepper for me, then added to the rest of the stuffing some adobo sauce from a can of chipotle peppers that were also leftover in the freezer. Mama tented foil over the peppers and baked them in a 375°F oven until they softened, 20–30 minutes. She took the foil off towards the end of cooking, to brown the tops of the peppers. 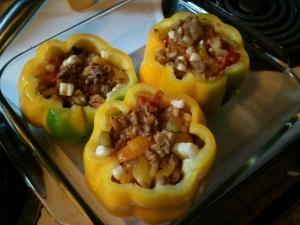 You can see the added corn & broken up “meat”balls added to the filling.

Meanwhile, Mama cooked some brown rice, but she could very well have used quinoa or couscous. You can certainly add this to the pepper stuffing, but she kept it on the side and added it to the peppers before we ate them. She also made a fast guacamole and baked some tortilla chips by breaking up a whole-wheat wrap, spraying the pieces with cooking spray, and putting them in the oven for 10 minutes while the peppers cooked. (You can season these with salt & cumin, but Mama left them plain.)

Though I’m generally a fan of avocados, I wasn’t too keen on the guacamole. I did dip my chips in it (just barely), though. And to everyone’s surprise, I ate more than a few bites of the pepper stuffing. I had to examine each bite first to figure out what was on my fork, and I wasn’t much in the mood to eat (having missed my nap), but eat it I did. Mama and Papa kept asking, “Isn’t it silly that there’s a pepper for a bowl?” I’ll tell you what’s silly: they ate their bowls. Now, isn’t that silly?

In a medium skillet over medium heat, heat 1 teaspoon olive oil. Add the beef and cook, stirring occasionally, until just barely cooked through, about 6 minutes. (If using frozen soy crumbles, cook until heated through.)

Meanwhile, carefully cut around the top of each pepper, right below the “shoulder,” then pull out the seedy core. (Save the tops.) Pull out any remaining ribs and seeds. Set cored peppers aside. Break off the pepper tops from the stems, and roughly chop.

To the skillet, add the remaining tablespoon olive oil, if necessary. Add the chopped pepper tops, onion, tomatoes, cumin, coriander, and salt and pepper to taste. Cook, stirring occasionally, until the pepper and onion are soft and the tomatoes have cooked down, about 8 minutes.

Add the corn and the chipotle pepper, if using, with as much adobo sauce as clings to it. Stir to heat through.

Divide the mixture among the peppers, setting them in a baking dish just big enough to hold them, such as a pie plate or 8 x 8” pan. Loosely tent the peppers with aluminum foil, then bake for 20 minutes. Remove the foil, then bake another 10 minutes, or until the peppers are softened and the tops are browned.