By now, it’s no secret that I love eggs. I’ll take them any way I can get them. But Mama says people are a little afraid of soufflés because they have a reputation for being temperamental [insert joke about soufflés being like Mama here]. Kidding aside, Mama showed me that there’s nothing to fear about this puffy little delicacy whose name comes from the French word for  “blow.” I blow on my food when it’s hot, and just yesterday I blew my first bubbles outside, so I’m excited to learn how to make these.

First, Mama said we have to make a “roo.” We’ve made this before by melting butter in a saucepan, then whisking in flour until it’s all cooked and bubbly. Then we add milk. Mama says some people say to use cold milk, while others say to use hot milk. She “splits the difference” by using milk that’s been taken out of the fridge for a little while, “just to take the chill off.” Once the milk’s added to the saucepan, we stir and stir until it thickens. (Well, Mama took care of the stirring because it was very hot.) She said this is what’s called a béchamel, but it looked like a white sauce to me. 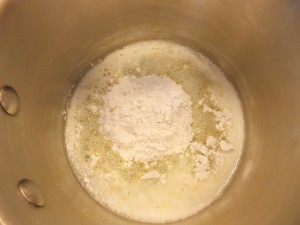 When butter’s all foamy, add the flour all at once and start whisking.

This is how the white sauce will look once all the floury clumps are worked in to the milk.

This next part is where it starts to get a little scary. You have to separate your eggs. I don’t quite understand how sometimes I can crack the eggs and roll them around and the shell comes off, and other times, Mama cracks the egg and out comes a runny gloppy mess. But this is one of those times when Mama has to crack the eggs. She notes that the whites must be meticulously free of yolk, and because she doesn’t take her own advice to separate the eggs one at a time over a small bowl (and then dumping each white into a larger bowl), she creates an opportunity to show me how to remove errant yolk from the white: use the shell to scoop it out!

Now Mama sets aside the bowl of whites and sets the bowl of yolks on a damp dishcloth—she explains that it’s to keep the bowl from sliding when she “tempers” the yolks.  (I thought this must be why soufflés are considered temperamental, but Mama says it’s how you bring hot and cold liquids together without ruining them.) She whisks the yolks to break them up, and then she pours a little of the hot white sauce into them, whisking the whole time. She adds a bit more sauce, still whisking, and keeps at this until all the sauce is in the yolks. Now you have your soufflé base. Mama says this is the time to add any flavors—crumbled cooked bacon, puréed or small-dice cooked veggies, cheese, fruit, finely ground nuts, chocolate—but we’re keeping it plain today.

Mama notes that here’s a good place to stop, if you have to. If you’re making soufflés for breakfast the next day or for dessert later on, this is where you should stop, put everything in the fridge, then take it out about a half an hour before you want to resume cooking—to “take the chill off.” That’s when you should turn on your oven, too. But before finishing the recipe, there’s one more thing to be done: prepare the ramekins. I didn’t know these could be used in the oven or for food other than mine. Mama always used to feed me from these…until I discovered that they break into so many pieces when they hit the floor. (I’m just learning about gravity, you know.) Brush melted butter all around the inside of each ramekin (or other small ovenproof dish), then dust each with either parmesan cheese (if savory) or sugar (if sweet). (Mama thinks finely chopped nuts might work, too.) This step, Mama says, gives the soufflé something to grab onto as it climbs up the ramekin. Mama set the prepared ramekins on a baking sheet.

Next, Mama turned her attention to the egg whites. She plugged in the mixer and began to beat them until they formed soft peaks.

See how the “peak” flops over?

Then she folded the whites into the yolk mixture, being careful to not overmix—she explained that if she stirred too vigorously, she could deflate the whites, which would not bode well for the soufflés. Mama says that as soon as the whites are folded in, it’s time to pour the mixture into the prepared ramekins. Fill them nearly to the top (most ramekins have an inner rim that’s a good marking spot). She sprinkled a bit more parmesan on top and popped them in the oven.

Then we waited. Mama said we may not open the oven to check on them, otherwise they’ll deflat like a balloon. So when the time was up, we turned on the oven light to take a peek. Those soufflés had puffed up like my grandma’s hairdo and were golden brown. Mama called them gorgeous. The real test was taking them out of the oven… and they held! They stayed puffy until we dug in. They were eggy, and they tasted as soft and fluffy as they looked. I could eat these all day.

Preheat the oven to 425°F. Brush six 6-ounce ramekins with melted butter, then dust with parmesan cheese (or sugar). Set aside on a baking sheet. Over medium heat, melt the 2 tablespoons butter in a medium saucepan, then add the flour, and cook, whisking constantly, until the flour is incorporated and the mixture begins to bubble, 1–2 minutes. Slowly add the milk and continue to whisk, working out any clumps. Then whisk occasionally until the mixture is hot and begins to thicken, 5–10 minutes. Do not let the mixture boil. Remove from heat and add the salt, pepper, and nutmeg.

Whisking constantly, pour a small amount of the milk mixture into the yolks. Add a bit more milk, continuing to whisk. Then add the remaining milk mixture to the bowl and whisk thoroughly. If adding flavors or cheese, do so now.

Beat the egg whites with a hand mixer on high speed until soft peaks form. Then immediately and carefully fold in to the yolk mixture in three additions. Immediately pour the mixture into the prepared ramekins, up until the inner line. Wipe the rims of any errant mixture. Sprinkle with additional parmesan, if desired.

Bake for 17–18 minutes in the center of the oven, until puffed and golden. The centers should look set and firm. Resist the urge to open the oven to check on them, but when you do take them out, a toothpick inserted into the center should come out clean. Serve immediately.

Note: Mama says it’s not a bad idea to add an additional yolk to the base if you’re going to be adding a lot of stuff to the soufflé; the extra yolk will make the base stronger. Try adding up to ½ cup shredded cheese and either ½ cup vegetable puree or 1/3 cup small-diced cooked vegetables or crumbled cooked bacon to the base (before folding in the egg whites). Some ideas: butternut squash-gruyere-paprika; onion-roasted pepper-rosemary-spinach; artichoke-red pepper-gruyere-thyme; red pepper-fennel-onion; or try blue cheese-walnuts by substituting finely ground walnuts for the parmesan cheese.

Variation: To make a chocolaty soufflé, whisk in 1/2 cup unsweetened cocoa powder and 1/2 cup sugar to the finished white sauce. After the mixture is tempered into the egg yolks, add 1 tsp vanilla extract. Add 1/4 cup sugar to the egg whites as they’re being whipped to soft peaks. Proceed with the rest of the recipe, but be sure to sugar your ramekins.

Soufflés will fall a little bit (cracking the tops) once they’re taken out of the oven, but they really should remain fairly puffy.