I’ve had a busy week. (Plus, Mama was sick, and I had an icky rash all over.) Mama has tried feeding me everything but the kitchen sink—and I love to play in the sink.

One day, she made me hummus. She claims I used to eat it when I was a younger baby, but I’m not so sure. It’s way garlicky. And because she cooked the chickpeas herself, instead of opening a can, she decided to roast a few before pureeing the rest into hummus. They became crispy but were still kind of soft. I thought they were terrible, but Mama gobbled them up. Meanwhile, she put the garbanzos (isn’t that a funny word?) in the food processor, squeezed in a lemon (and let me suck on the rind), plopped in tahini (which she said is like peanut butter, except made with sesame seeds, but I didn’t think it tasted like peanut butter at all!), and added garlic, fresh parsley, and a couple other seasonings. Truth: I had a few bites, but I preferred the pita…with actual peanut butter.

Then Mama had the notion to make a wheat berry salad. Wheat berries. For dinner. Now I can’t say that it was all bad. She did make a walnut oil vinaigrette and added spinach, red pepper, peaches from the freezer that I helped pick last summer, and raisins. I just couldn’t get over the chewy texture of the wheat berries. Mama says they’re supposed to be that way, but I didn’t get very far beyond the “no-thank-you” bite. Wheat berries for dinner? No thank you!

Papa took a turn with a shrimp scampi he baked in the oven. He showed me how he “butterflies” shrimp. I once went to a butterfly hatchery, but I didn’t know there were shrimp butterflies! Then Papa chopped lots of shallots and herbs and smooshed them with a lot of butter. I like butter. Mama made rice, and I have to admit this was one tasty dish. Mama said it was too bad I decided to like this one because she would have liked some more. You and me both, Mama. 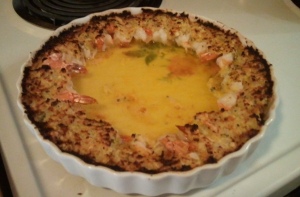 Papa did a pretty good job and used all that butter on the rice. How bad could that be?

I think my folks were tired of the kitchen scene by the end of the week because they took me out for Indian food on Sunday. There were gold elephants! On the walls! And sparkly pictures with even more elephants! And music I’ve never heard before! Mama’s not so bad at Indian food herself (maybe she’ll make naan again soon, so I can tell you all about it), but she doesn’t make all the different things the way this place does. She and Papa thought I’d gobble up everything, but they were wrong. Mama, though—that smart cookie—ordered me a mango lassi. She said it was like a smoothie, but it didn’t matter. It was delicious, and I got to drink it with a big-boy straw. Mama traded me a sip of the lassi for every bite of mutter paneer, aalo gobi, and channa saag I ate. It was worth it. Then I finished the meal with rus malai and kheer (“Who doesn’t like kheer?” Mama and Papa asked). All in all, I’d say it was a good meal…and not too much ended up on the restaurant floor. Did I mention the elephants?

Maybe this week will be different. But I wouldn’t bet on it.

3 thoughts on “A Week of Funky Foods”