…and you can put dinner together pretty quickly. Or so I’m told.

Mama occupied me with a can of chickpeas.

She showed me how to squeeze their little tails to pop them out of their skins. (I ate as many as I popped.) 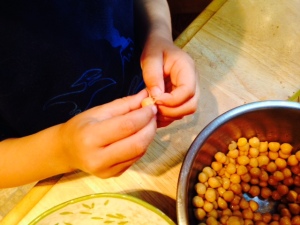 Meanwhile, having been inspired by a recipe, she set to work on a dinner that involved rapini, or broccoli rabe. Not to be confused with broccolini (broccoli’s slender cousin), rapini is more leafy than broccolini. It also shares family lineage with turnips. Who knew? 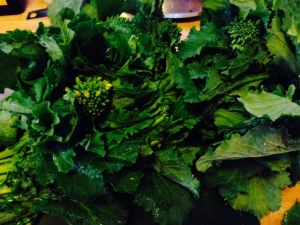 But I’m getting ahead of myself.

What prompted the can of chickpeas was my reluctance to pull the silk off several ears of corn. Have you seen how much silk gets trapped between the kernels? I was in no mood to pluck more than a few strands, so Mama passed the task to Papa and set me up with chickpeas.

All the while, the grill was preheating. When the corn was clean, Mama slathered olive oil on her palms, then rubbed them all over the corn. These Papa placed directly on the grill grates. He sprinkled kosher salt over them, then closed the lid. Every few minutes, one of them went out to turn the ears. Mama said she wanted “a good char” on them. At one point, she called us out to hear them popping!

Meanwhile, back in the kitchen, Mama set some spaghetti to cooking while she prepared the rapini portion in another large pot. The house smelled good with the sizzling garlic and lemon. By the time I was done with the chickpeas (Papa helped near the end), everything was done. The corn was brought to the table, the rapini-lemon-cannellini bean mixture was tossed with the pasta, and we were ready to pig out.

Except, I had eaten all those chickpeas. Still, I tried a bean. And a rapini floret—it was bitter! I did eat my corn, though. What’s not to like about corn on the cob? Luckily, none of the kernels popped in my mouth. 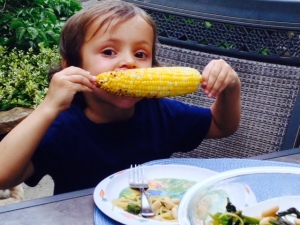 As I declared, “Good dinner, Mama!” It was made so quickly, and we were done with it so early, that I was able to play a long time before I had my bath. No distraction required.

Char-Grilled Corn on the Cob

Preheat the grill. (Mama set it to about medium heat, and the temp gauge said it was around 400°F.) Using tongs, smear a paper towel with oil, and rub the grates. Spread about a teaspoon of olive oil between your palms, then run them around the ears of corn. (They don’t need to be heavily coated, but use more oil if necessary.) Sprinkle with salt (and pepper, if desired). Set ears directly on grill grates then close the lid.

Every few minutes, turn the ears. A char is desirable. Grill for about 10 minutes (you’ll start to hear the kernels pop). Remove to a plate and serve as is, or with butter and Parmesan.